Diving doesn’t just take place in the warm waters in the Caribbean. You could just as easily dive under the ice, but if you’re going to do that, you’ll need to be prepared for the extreme temperatures.

On the other side of the coin, maybe you’re an experienced diver, and you find diving in colder waters to be entirely exhilarating. If you enjoy diving in cold water, then you’re going to be well-acquainted with the gear necessary for going through the dive successfully.

The right gear means that you’ll have to include making sure your regulator is capable of handling the colder temperatures. Not having a regulator that can handle the freezing temperatures means you will not be able to dive safely.

The Mares Abyss 22 Navy makes it possible for cold water diving and meets or exceeds the most critical expectations – not having your compressed air freeze when you get into colder waters.

What is the Mares Abyss 22 Navy?

The Mares Abyss 22 Navy is a high-performance regulator that functions exceptionally well for both first and second stage regulation. There is not much in the way of metal on this regulator, but it does not compromise its integrity at all.

The design improved the surface area to provide the first stage with better thermal response and thereby adding to the regulator’s reliability.

Mares also has a proprietary Dynamic Flow Control mechanism that is designed to minimize pressure when you inhale. If you’ve ever gone really deep, you know that this is important due to dive conditions.

Mares also added their patented Tri-Material Valve to further improve safety and performance. The technology ensures that the valve will always have the perfect seal regardless of the conditions you’re diving in.

You’ll also find two high-pressure ports and four low-pressure ports complete with Nitrox compatibility as soon as you pull the unit out of its packaging.

Features of the Mares Abyss 22 Navy 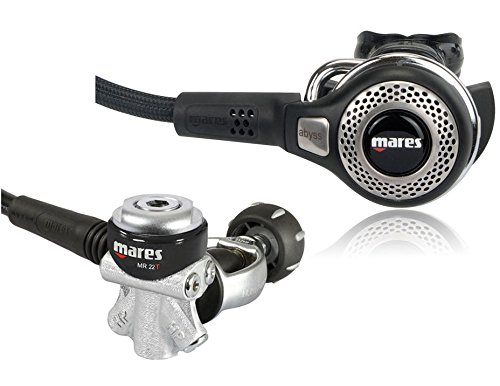 As you compare other regulators, it will be helpful for you to get to know the characteristics of the Mares Abyss 22 Navy. The second stage is made entirely of metal which provides excellent thermal protection against ice formation that can happen when you’re diving in colder temperatures.

You’ll appreciate the construction when you don’t experience any free flow since it will keep working the way it’s supposed to. The downstream demand valve also minimizes the drop in pressure when you inhale. The simple design ensures reliability as well as performance.

When examining the second stage, you’ll also notice that there are no controls, but don’t worry about that. They use a Vortex Assisted Design System along with Mesh Grid technology.

It sounds like a lot of fancy words, but what it means is that there is a bypass tube that delivers the air straight to your mouthpiece. By delivering the air in this way, there is a diaphragm effect causing it to stay down while you inhale. This reduces breathing resistance regardless of the depth, and with the mesh grid on the front cover, free flow is prevented even with strong currents.

The hose is also more durable courtesy of the Super Flex design which also improves your freedom underwater in addition to decreasing jaw fatigue.

What Makes the Abyss 22 Navy Unique?

The Abyss 22 Navy was designed to tackle cold water temperatures including diving under ice. The chrome-plated first stage utilizes a diaphragm design and is balanced as well as sealed. The second stage is thermal due to its fluoropolymer resin coating that prevents freezing.

The Vortex Assisted Design reduces breathing resistance which is a common concern if you’re diving at all, but even more so if you’re doing deep water diving and diving in colder temperatures.

This regulator was designed for extreme temperatures and is guaranteed to deliver wherever you might be diving. Cold water is no match for the Abyss 22, and you will love how well it performs in all conditions.

Pricing depends on what you’re looking for. You can get the regulator by itself for around $600, or you can get a diving package that includes air control and BC for around $1400.

The package includes the Mares Hybrid Pro Tec BC, the regulator yoke, air control for alternate air source, a wrist dive computer, and a torch from Phantom Aquatics. You’ll also receive a regulator bag to store it in.

There is a variety of accessories available for the regulator, too. You can get additional gear like a torch, and a wrist dive computer separately if you decided to go that route. It’s not a bad way to go, either, since it might end up being less to specify which pieces you want instead of purchasing the entire bundle all at once.

You can expect to pay several hundred dollars for a quality piece of equipment, so you should look at it as an investment. This is an exceptional investment because not only is the design and quality excellent, but the Abyss 22 Navy was developed and designed to surpass the extremely demanding tests from the U.S. Navy.

There are a few reviews on the Mares Abyss 22 Navy, but you’d be wise to do your own research, too, and see what else Mares has to offer. They have several different products that may interest you as well.

Dean left a 3-star review on Amazon saying, “My only issue is the set does not come with a pressure gauge. So, after a $1300+/- purchase, you must spend another ~$200 to be able to dive. Just a little frustrating. If you sell with a dive computer and no pressure gauge, make sure the dive computer (Aeris A300) actually supports hoseless pressure readings. This one ABSOLUTELY does not.” In spite of the lack of gauge, the equipment itself is not in question, so you’ll need to decide whether or not that is an issue for you.

Curtis, on the other hand, left a 5-star review saying, “Great BCD and easy to use, great quality, used on 40 dives. Ring snd (sic) two pockets. Folds up small for travel. Going to buy one for son.” It sounds like he approved of this setup, so much in fact that he wants to purchase a second one for his son.

You can find other reviews at Leisure Pro, too, like this one from IceBoy. “I’ve used this regulator for around 30 dives with the last ten being freshwater ice dives. In warm water it has been a fine regulator, likely no different from a standard Mares 22. The second stage does tend to freeflow at the surface if the mouthpiece faces up. I’ve read that this may be a sign of a perfectly tuned regulator. Under ice, it behaved just as well. At the end of my course, we made a deliberate effort to try and freeze it. A minute of rapid breathing had no effect. It took over 30 seconds of continuous purging before the second stage locked. My instructor was very impressed, based on his experience with loads of other ice ready regulators. With that residence, I doubt it will ever freeze in normal use under ice.”

Cold B. left plenty of positive remarks, too. “I wanted a highly reliable first & second stage for my Deco bottle when tech diving. The Mares Abyss Navy gives me that comfort, knowing that it is reliable at 165 ft, in +3 C water. I’m happy with this product and will recommend it!”

How the Abyss 22 Navy Compares with Other Scuba Regulators

Finding a good regulator can be difficult especially if you’re going to be doing some cold water diving. It’s easy to get caught up in the specifications and not be able to decide on what is going to be significant.

The Abyss 22 is also a diaphragm regulator while other cold-water regulators are made with piston construction. Piston first stages tend to be more reliable and are the preferred first stage for cold-water divers, but they tend to be more expensive. Although piston construction is more reliable, that does not mean that you can’t find quality diaphragm regulators.

Like all regulators, you need to make sure you take care of the equipment. It’s especially crucial because regulators are delicate pieces of equipment, and they’re expensive. Before putting it away until your next use, make sure you rinse it off with warm water and dry it completely.

When you compare the Mares Abyss 22 Navy, you’re not going to be disappointed in the overall performance of the unit, and it’s also not the most expensive regulator out on the market.

Other regulators that compare relatively well to the Abyss 22 Navy include the Cressi XS2/AC2 and the Atomic Aquatics T3 Titanium regulator. If you’ve researched diving gear, you’ll recognize both names as leaders in the industry.

Cressi is known for being simple, reliable, and for having features that are incredibly user-friendly. Its simplistic design makes maintenance affordable and competitively priced among other regulators in this same scope.

The Atomics Aquatics T3 Titanium, on the other hand, is one of the most expensive regulators on the market. You can end up paying over $1700 for the regulator by itself. Of course, there is a good reason for it. The regulator is lightweight and is considered to be top of the line.

The Mares Abyss 22 Navy is a regulator that has a reputation for fantastic performance, safety, and reliability. It makes breathing underwater easier regardless of how deep you go or how cold the water gets.

The overall unit is also lightweight and designed to decrease jaw fatigue, which is something all divers can appreciate regardless of your expertise.

You don’t need to relegate diving to warm water, because, with this regulator, you can dive in cold water, too, without worrying about any issues when it comes to your equipment.

Take care of the gear appropriately, and it can last you for a very long time. There are people who have had their diving equipment for several hundred dives and only needing minor maintenance to keep it up to par.

In the end, the decision is yours. You’ll have to read reviews and compare this regulator to the other ones on the market to find the one what fits what you want and need to make your diving experience perfectly memorable.