A diving helmet is a complex head enclosure that allows the wearer to dive deep into the ocean for exploration and educational purposes.

Marine biologists may use this type of equipment when studying sea creatures that live deep within the sea.

They may also be used by explorers searching for lost and forgotten artifacts which have been preserved for centuries on the ocean’s floor.

Diving helmets contain a breathing gas supply that allows the user to breathe normally while they are under water.

While these large and bulky helmets are typically used for commercial purposes by professional divers and marine experts, you can also find some diving helmet models that may be used with standard scuba diving equipment.

Either way, you should have some experience with deep sea diving before you attempt to explore the depths of the ocean while wearing a diving helmet.

If you are looking for a commercial diving helmet to use for deep sea diving or exploration purposes, we have a few suggestions for products made by the top-selling brands in the industry.

These brands include Kirby Morgan, Gorski, and Desco. Let’s take a look at some of the top-selling models from these three brands.

The Kirby Morgan SuperLite SL n27 Diving Helmet is an impressive modern helmet that includes various features to help keep you safe while working under water.

These helmets are available in various colors to suit your personal style. They provide the professional working diver with a compact helmet that has a snug and comfortable fit.

Designed to be smaller than other commercial quality diving helmets on the market, the SuperLite SL 27 features the company’s Tri-Valve Exhaust System that offers optimal dry breathing under all types of work conditions – all without increasing the user’s breathing resistance.

The SuperLite is different from all other diving helmets currently available because of the innovative water dump valve located on the port side.

The location of the valve helps to contribute to the helmet’s compact size. This commercial helmet by Kirby Morgan features an All Stainless-Steel regulator that offers superior breathing performance. Known as the SuperFlow 350 regulator, this piece offers amazing performance and breathability while you are under water.

The helmet includes a diver adjustable system and the regulator may be fine-tuned during use to work better according to the workload. This can be especially important when you are also using a low-pressure compressor that has different supply pressures.

The Kirby Morgan SuperLite has several quality features that will make your diving experience more enjoyable.

The Air Train works to diffuse all incoming air or gas onto the face, the port, or the lens. It helps to defog the lens and ventilate the area.

This valve offers additional flow of gas into the helmet to improve ventilation and defogging efforts.

This life-saving valve will supply the diver with breathing gas in emergency situations.

The bubble deflecting Whisker Wings prevent bubbles from entering into the face port area and the ears. By doing this, visibility is improved as weak as the level of internal noise.

The non-return valve helps to prevent the loss of gas pressure if there is damage to the umbilical.

This device is designed to allow the diver to block their nose so that they may equalize their ears.

This is a balanced, stainless-steel, high-quality regulator that offers easy breathing and great performance when used with low-pressure compressors.

The module can be easily removed from the helmet to make repairs on communication parts. This makes the process fast and hassle-free. It is available with your choice of connectors including a bare wire post connection or a male waterproof connector.

The exterior shell of the helmet is made from hand laid glass fiber and reinforced thermal setting polyester (fiberglass) with carbon fiber reinforcement located at all key points which make it extra durable. The helmet itself is lightweight and impact-resistant. It offers a heat/cold barrier and is a great electrical nonconductor.

The side block on this helmet has several uses that can be beneficial to the diver. It features additional ports that are built-in to help control air flow if necessary.

This mask is made from durable and flexible silicone material that is hypoallergenic. It is designed to last much longer than masks made from latex material.

The top handle can easily be removed without breaking the seal. This makes it easier to attach accessories.

To purchase this diving helmet online, you will need to log in to the retailer’s website using your commercial diver login. These commercial-grade helmets can only be purchased from websites and companies that sell professional diving helmets designed for occupational use.

The Gorski G3000SS Diving Helmet takes all the innovative features from the original Gorski Helmet and brings it all to the next level with this innovative and modern design.

This helmet includes all the latest convenient features like the Apeks high-performance balanced regulator. These quality regulators feature an industry leading design that dive equipment companies try to reproduce.

The Gorski G3000SS features a fully balanced design with double exhaust and it is made from high strength composite materials. It is suitable for use in all depths of water and work rates. The breathing loop remains protected while inside the shell, and the side-mounted shields help to protect the diver from side impact.

The Gorski G3000SS helmet has several key features that make it an exceptional diving helmet for commercial use.

When you are deep sea diving, you need a great field of view so that you can see all around you without obstruction. This helmet can provide you with that advantage.

You need a helmet that features a strong and durable design. This helmet is made of strong and long-lasting materials to do just that.

Stainless Steel 316L is more corrosion-resistant than other types of metal. It is also resistant to pitting and crevice corrosion.

Resistant to Corrosion and Electrolysis

Along with being resistant to corrosion, this helmet is also resistant to electrolysis which is the chemical decompensation caused by passing an electric current through a liquid such as water.

This helmet features excellent balance and position to ensure that you have a stable and comfortable dive every time.

The quality communication system ensures there will be less errors and fewer mistakes while you are talking with the crew.

The simplified layout makes it easy to switch out wires and components as needed while you are at work.

The optional harness-mounted switch over valve is also very easy to connect and disconnect as needed without any special tools.

You will need a commercial diver login to purchase this helmet from an online retailer. 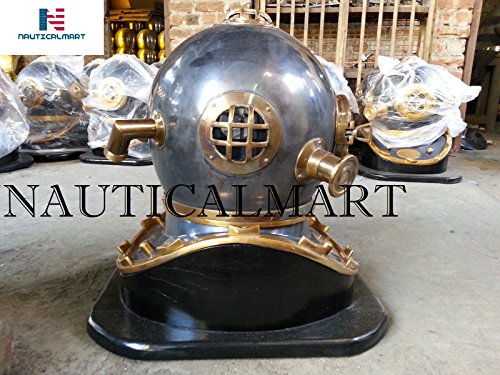 Desco originally produced the U.S. Navy Mark V Helmet back in 1942. Today they continue to make high-quality, reliable, and dependable diving helmets that modern-day explorers use for deep sea diving.

While Desco manufactures modern helmets, they also stay true to their roots by designing and producing an updated version of the Mark V that is fully functional to use underwater and complies with all safety regulations. If you want to dive using a helmet that is reminiscent of those worn by soldiers in the U.S. Navy during WWII, this is the perfect helmet for you.

When the U.S. Navy requested that these special diving helmets were made, they provided the different manufacturers with drawings of how they wanted the helmets to look and so that parts would be interchangeable between manufacturers. Desco helmets are still made today using these same specifications.

Their company still manufactures the helmets the same as they were original made. The shells are made from spun copper and the breastplates are hand-pounded using mandrels from the 1940’s. These unique methods give each of the helmets an individualized touch.

Features for the Desco Mark V include a Double spring adjustable tension auto exhaust valve with an exterior star wheel. An interior chin button, and a banana tube that sends exhaust air through the rear of the helmet.

There is also a non-return valve with standard submarine threads, breastplate eyelets for hose and lifeline attachments, a safety lock and chain.

The Desco Mark V Diving Helmet is available for purchase for $6,900. You will need your commercial diver’s login information to purchase this item.

The Appeal of Antique Diving Helmets

If you search online for a new diving helmet to buy, chances are you may have to revise your search terms a few times before you get the results you want.

It turns out, vintage diving helmets are a popular item that many people love to collect and display in their home or office.

These vintage helmets look very different from the modernized diving helmets you would use today for exploring the ocean. They have an attractive nautical style that improves the look of any ocean-themed home décor.

Some collectors like the rich history behind many of these helmets, since they were used during WWI and WWII by the U.S. Navy.

The shimmering copper or lustrous chrome material used to make these helmets has allowed them to age beautifully and create a stunning conversation piece no matter where the helmet may be displayed.

How to Identify an Authentic WWII Diving Helmet

If you have watched any of the antiquing shows on TV, you may already be familiar with vintage diving helmets and how popular they are among collectors.

While the authentic vintage diving helmets can be worth a lot of money, especially those that were used in WWI or WWII, there are also plenty of reproductions and fake vintage helmets out there.

These fakes can easily fool antique collectors and those who attempt to resale vintage items for a profit.

The Mark V was manufactured by several companies including Augustus Siebe, A.J. Morse & Son, Schrader, Desco, and Heinke of England. Perhaps the most popular Mark V Helmet from the U.S. Navy was designed by George Stillson back in 1915.

To identify a real Mark V from a fake, you should know that all Mark V’s have a hinged faceplate, and not one that is screwed-in. The exhaust valve on later models was located at the lower right of the helmet and modified so that it could be pulled in by the wearer’s lips or pushed out using their chin. It was eventually renamed the “chin-button.”

There is also a channel located at the far end of the helmet with perforations so that exhaust air would be guided to the rear of the helmet. The channel also helped to keep the bubbles out of the diver’s view.

The Mark V helmet was used by the U.S. Navy up until 1980 when they started using modern plastics. But the classic diving helmet is still used frequently in other parts of the world.

Which Diving Helmet is the Best Option for You?

The type of diving helmet that you purchase will depend on what you plan to use if for.

Those mentioned in this article are all commercial-grade helmets that are used for occupational purposes. They aren’t designed to be used for your basic scuba diving or deep sea diving for fun.

These helmets are made from high quality materials and are designed to make you diving experience a pleasant one.